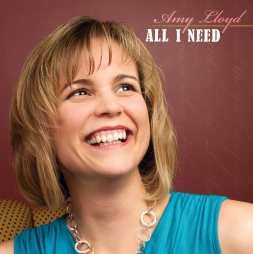 Tell us a little about Amy Lloyd?

A farm girl and coal miner’s daughter, Amy Lloyd grew up singing and playing piano in small country churches in central Illinois. Amy sang her first solo at age six, thanks to the encouragement of her grandmother, a church pianist. Recognizing her talent, her parents enrolled her in piano lessons. Amy went on to also play flute in the school band and serve as the high school marching band drum major.

Amy’s college years at the University of Illinois and early career years as a legislative aide on Capitol Hill were a diversion from music, but her passion never died. With the birth of her first child, she decided to stay at home, subsequently granting her more time to serve as a church musician.

Amy offered regular solos, sang in the choir, played flute and percussion in the orchestra, helped lead music missions trips to Russia and held lead roles in holiday musicals. In 2011, she portrayed the lead as Mary, the mother of Jesus, in her church’s production of Brentwood-Benson’s “The Christmas Song.”  During this experience, she realized that her voice is her most effective means to reach and encourage others. The following year when her youngest child started school, Amy enrolled in voice lessons.

In 2013, Amy recorded and released her freshman album, “All I Need,” which was crowd-funded through Kickstarter backers and other financial supporters.  “All I Need” turns the heart’s attention to the soul’s greatest need: the grace and love of the Savior.  With a folk-inspired, acoustic sound, it is a blend of both modern and traditional Christian hymns and praise songs.

Amy self-produced “All I Need” with the assistance and accompaniment of her voice teacher, Antony Zwerdling.  The album was recorded, mixed and mastered by Matt Hinshaw at Nightsky Studios in Waldorf, MD.

In the wake of the release, Amy bought her own acoustic guitar and started taking lessons when a severe core muscle injury put her on extended voice rest.  During her recovery, she recorded and released a single in December 2014 of her own guitar and vocal arrangement of “What Child Is This?”. The single was recorded, mixed and mastered by Matt Hinshaw.

Amy currently lives in Indianapolis, Indiana, and studies music at Butler University.  She and her husband, Matt, are members of Village Live Church, a church plant in the diverse area of Broad Ripple, Indianapolis.  They have two elementary school-aged children, Charlotte and Emmett.

Who are your top 3-5 influences?

The more well-known artists who influence my music are Sovereign Grace Music (Bob Kauflin), Keith & Kristyn Getty, Fernando Ortega, Alison Krauss and Simon & Garfunkel. However, my greatest influences are the music teachers and directors from whom I have had the opportunity to learn and grow.

How long have you been writing your own music?

I am a new songwriter. I’ve only been writing songs since I started playing guitar a few years ago. I hope to start sharing my songs in concerts and with a recording project in the future.

When are your new projects coming out?

I have two albums in the creative stage, and I hope to record one of them to be released in 2017-18.

The first project is a hymn project. When my grandmother died several years ago, I was given her Bible, her hymnal and a hymnal that was owned by her mother-in-law, my great-grandmother. My great-grandmother had marked some of the songs in the hymnal, none of which are very familiar today. I want to bring these songs back to life with simple and fresh arrangements and interpretation.

As I mentioned in the previous question, I have been writing songs since 2014. When I started my songwriting, I was dealing with a major surgery and recovery. Since then, our family relocated, which also came with several challenges. I hope to compile an album of songs centered on the theme of God’s faithfulness through trials.

Do you perform your music live?

My biggest goal in 2017 is to start singing concerts for churches. If your church is interested in hosting me for a concert or a women’s event, please fill out the contact form on my website: http://www.amylloyd.net.

I sing in the worship band at Village Life Church in Indianapolis, IN. I am also a professional chorister. I am classically trained and enjoy singing in a choir just as much as lead in a band.

What is one thing you would tell your fans?

God knows. Whatever it is that you’re going through at this moment, you are in the palm of His hand. It is His plan. He loves you. He’s for you, and is working all things for your good.

What is the best way for people to follow your music?